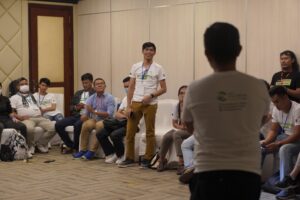 News and information manipulation are global issues that are not exclusively found in global south countries, said Chandara. Fake news tends to spread rapidly, especially via social media platforms. Fake news and disinformation are often associated with political motives. However, with the recent uprising of social networks and the internet, spreading misinformation can also be used to defame individuals, responding to the interests and benefits of individuals and groups. 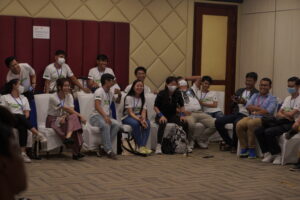 The speaker raised some challenges associated with fake news, such as disbelief in the media sector, social chaos, and digital security breaches. Chandara provided a practical example to show the consequences of creating and spreading fake news. During the COVID-19 pandemic, rumors, and false information about the death toll associated with the new vaccines spread on the internet, causing social unrest and generating fear among people. Mistrust raised quickly, making it hard for responsible bodies to cope with the spread of the pandemic.

Equally important, journalists and citizens should always fact-check information before distributing it to others. Users should pay attention to texts, photos, videos, and deep fakes. To the attentive participants, Mr. Chandara illustrated several fact-checking and information verification techniques that users can apply to avoid spreading false information: cross-check news between different platforms, avoid consuming news or media from unreliable sources, and verify information authenticity using official websites (governments and organizations). The Royal Government of Cambodia has been proactive in tackling fake news and has worked on the implementation of the national internet gateway (NIG), which will give the government control over the internet traffic in the country. While the government has stated repeatedly that Cambodia’s NIG will be used to combat fake news, domestic and international human rights organizations have stressed that it will seriously curb Cambodia’s internet freedoms. 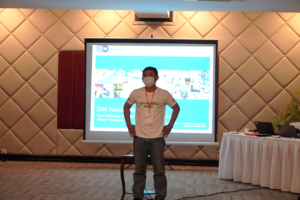 Additionally, the speaker introduced “Tineye”, a website that allows users to reverse image search, to the audience. This website identifies whether a photo is old or has already been posted elsewhere. Chandara also presented “fotoforensics”, an image search engine enabling users to analyze digital pictures and see the image’s metadata.