Ratana Sopha is an expert at using online platforms as a tool for HIV prevention and education. He began by giving an overview of the history of HIV prevention efforts in Cambodia. The history can be presented in the three temporal phases, characterized by a focus on condom use prevention methods, increasing treatment rates, targeting at-risk groups with testing and treatment services, and lowering the “test to treatment time.” As a result, HIV prevalence rates have decreased from 1.7% in 1990 to 0.6% in 2016. Cambodia now sees 500 new cases each year of HIV and is working to move that number below 300 cases annually. Once this target is achieved, the disease will be considered to be “virtually eliminated.” Cambodia is positioned to become the first country in the world to reach virtual elimination. In 2014, the UN set a ‘90-90-90’ target; aiming to diagnose 90% of all HIV positive people, provide antiretroviral therapy (ART) for 90% of those diagnosed and achieve viral suppression for 90% of those treated by 2020. Cambodia met this target ahead of schedule in 2017 and received an award as result of its successful HIV prevention efforts. In discussing Cambodia’s success, Mr. Ratana expresses, “just because we are not a developed country does not mean we cannot achieve this. Cambodia is a model for other countries – with less money, resources, and technology, Cambodia has shown it is possible to achieve the 90-90-90 goal.” 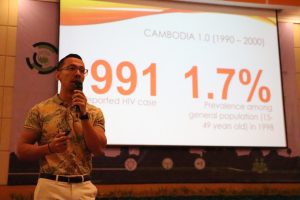 Mr. Ratana’s work focuses on how to use online platforms to increase the effectiveness of HIV education and prevention efforts. HIV and the risky behaviors that contribute to HIV still face significant stigmas. As a result, it is sometimes difficult to encourage at-risk individuals to get tested to know their HIV status and seek information on HIV. Mr. Ratana uses online platforms as a way to open new doors and have conversations that would be difficult to have face-to-face.

He also uses online methods to increase the efficacy of prevention efforts. Many young people now use social media and the internet in new ways, including to socialize, get their news, meet new people, and find significant others or romantic interests. Mr. Ratana’s team conducted a survey to learn more about online users’ behavior, what people want to learn about HIV/AIDS, and what common misconceptions exist about the disease. As a result of this research, his team is able to better tailor their prevention efforts toward targeted groups. For example, one at risk group is men who have sex with men – and Mr. Ratana’s research showed which gay dating apps men are using so they know where to push promoted education campaigns. Further, their team also conducted density mapping, showing when and where people are using these apps so they can further tailor their education efforts to specific times and locations.

Mr. Ratana’s session shows how online platforms and research can be utilized to tackle difficult health challenges. His methods can be translated to participants who seek to utilize information and communication technology and make data driven programmatic decisions in facing their own development challenges. 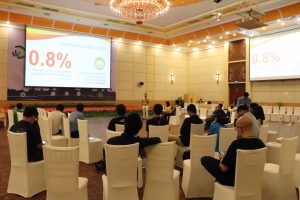 As a Fulbright alumnus, Ratana has had a relatively diverse professional portfolio, from public university lectureship to private company management to non-profit work. Through schooling and his careers, Ratana has developed keen interests in a myriad of topics, including higher education and youth empowerment, sustainable urban living, human interaction in the age of social media, and public health, to list a few. Over the past 5 years, Ratana has been professionally involved in the area of HIV prevention among at-risk populations in Cambodia, focusing mainly on how existing and upcoming information communication and technologies could be leveraged to advance HIV prevention work online and at the community level in the country.